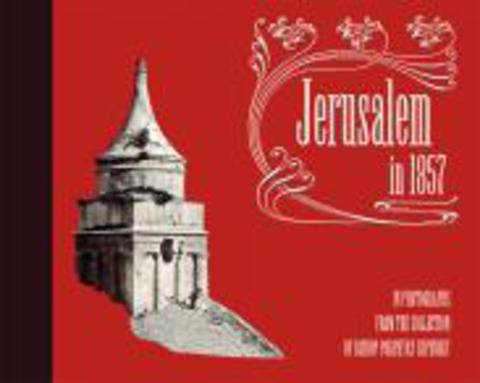 Every pilgrim or traveler who finds himself in Jerusalem attempts, as much as he can, to bring back with him some material artifact of the Holy City: a stone, a flower, a palm branch, assorted souvenirs, and sacred objects made of native materials. Almost always, among these objects there will be a picture or a photograph, particularly if the traveler happens also to be a connoisseur and collector of antiquities. Such a man was the head of the first Russian Ecclesiastical Mission in Jerusalem, the archimandrite Porphyry Uspensky. Thrice he came to Jerusalem, living there for extended periods. In 1843–1844, he visited the Holy City to work through some issues connected with the opening of the Russian ecclesiastical embassy; from 1847–1854, he headed the Russian Ecclesiastical Mission; and in 1860 he spent five months working with ancient manuscripts in the patriarchal library and other Palestinian monasteries. It was during the latter period that he began to acquire the works of the Jerusalem photographers John Dennis and James Robertson. These views of Jerusalem and its environs, taken in 1857 by the photography firm of Robertson & Beato, are represented in the present album. Leaving Jerusalem, Porphyry returned to Russia with his enormous collection of ancient manuscripts, books, icons, and engravings, compiled during his long years of residence in the East.